Chapter No. 4 Sufism and Opponents

One group objects that there is no role of in Islam. It has been forcibly incorporated in Islam. Another group argues that mysticism or spiritual school of thoughts is "Opium". Man gets paralyzed after learning it.

The mystic or sufi escapes from worldly blessing because he has no courage to face the bitter realities of life in the world. Because of lack of courage, sloth, idleness and cowardice, he becomes a recluse.

The debate has been going on for thousands of years. Some people think that sufi'ism came from Buddhism. By renouncing world they, in fact, follow Lord Buddha. Lord Buddha adopted the life of renunciation and starvation by rejecting the throne. Similarly the Muslim Sufis chose jungles and caves by renouncing worldly pleasures, luxuries and rest.

Some people believe that Sufis fasten themselves in the shackles of impracticality because they lack courage to face the problems of life. That is why they look for escape after getting frightened from trials and trial tribulations.

The opponents have said a lot and the advocates have answered the questions of the opponents. In this way sufism became a mystery. But history gives the evidence that Sufis have been present in all periods. They not only protected spiritual branches of knowledge but they also passed on these branches of knowledge to their students, through written form, letters, books and from one man to another.

The study of history reveals that no objection leveled against sufism has been note worthy. All the objections are controversial and logical. It is said that:-

I.                The religious scholars who followed the lshraqins and interpreted the Islamic injunctions in the light of Ishraqi principles. Sufism is product of these principles.

III.                In the third and fourth century, a strange collection of deeds and beliefs suitable to personal interests was prepared and it was named mysticism.

IV.                In sixth and seventh century the sufism gained worldwide popularity and the ancient principles of meditation and contemplation were incorporated into it.

These are the objections which are not approved by the reasonable and sensible people.

The Holy Quran and hadiths show that God created creatures and revealed Himself unto His creatures to introduce Him with His creatures. This event took place with the spirits in the inception. When the spirit resided itself in the body and physical body made the worldly interests their goal, two types of knowledge emerged:-

(i)      Imagined branches of knowledge

1-      Imagined knowledge means that there is nothing certain in it. Each part of knowledge is based on imagination or fiction.

2-·     Real knowledge means that there is no human imagination in it. Fact and reality dominates each part of knowledge. ·

"The Mustashrikin's discussion" about knowledge, the views of the knowledge of asools, or the interpretation of the deeds and beliefs of personal interest all these things are based on imagination.

To argue that there was a group of "Ashab-e-Sufa" and they had devoted themselves to the preaching of Islam by renouncing world and if any person who devotes himself for preaching is a sufi.

This thing is against reality because when the "Ashab-e-Sufa.., married, the Holy Prophet (P.B.U.H.) assigned the task of Din (religion) to them in a way that they performed it along with performing their rights and responsibilities to their family, society and neighbours.

This objecti0n that there is no priesthood in Islam and sufis follow priesthood is an intrigue and hypocritical attitude. Those people who have tried to make themselves prominent or shut themselves in the shell of their ego to pose themselves mystics or Sufis and went into the depth of "sufism" have no argument to solve this problem.

The word "Sufi" is neither Arabic nor Islamic rather is Greek in its origin which is derived from "Soaf'. In Greek language , "Soaf' means "Wisdom".

Hater or Renouncer of the World

When Greek books were translated into Arabic in the second century, "the Israqi Hakims '' translated "Soaf' as hakims". Gradually the word "Safi" became popular. It is also narrated that Ghoas Bin Mur had devoted himself for the 'Khana Kaba' and his popular name was"Sofa".

Those people who associated themselves with Ghoas Bin Mur were named Sufis. Ghoas Bin Mur is known as Sofa because his mother's children died after their birth. Soafa's mother gave an oath if her child did not die, she will devote that child by putting wool on its head for 'Khana Kaba'. After the birth of Goas Bin Mur, her mother fulfilled her oath and Ghoas Bin Mur became popular as Soafa.

Some people think that "Sufi" is derived from "Sufana" which is a type of grass. The Sufi people lived on the grass and leaves of deserts so they got popular with the name of soafa" some people have exaggerated in the interpretation of the word sufi and they say that this name became famous due to the priests who lived in the church of Saint Sophia and who were haters of the world. This concept gradually became popular with the Muslim dervishes.

In short, there is unending debate about “Tasawaf" but he pity is that nobody has tried to consider that it means external as well as internal purification. In other words, those people who are purified from spite, ill-will, animosity, hatred and mischief making are Sufis.

God be praised! It is a good thing that even the opponents have not talked about the negative aspect of Sufism and Sufi.

The Greek word theosophy means the wisdom and prudence of God. From this point of view, anybody who searches for the wisdom of God is a sufi.

According to the Greek word, sophies, actually were those elders who renounced all other preoccupations and dedicated their lives for research, for the study of universe and for the search of the wisdom of God's universe.

This thing does not embody the renunciation of world. Therefore, when a scientist researches, he ignores all other worldly things and concentrates on his work.

The intellectuals of Iran consulted the wisdom of God during the period. These elders tried to trace the self of man (Nafas-e­ Insani). They went against the pervasive cruelty and injustice in the society. Besides, they protested against the exploitation of human rights. As a result, the worshippers of world and powerful people have always tried to humiliate the Sufis. But the Sufis have not given any importance to hostility, animosity or violence. They had to face the violence and indifference of rulers along with the intellectuals. By the grace of God, this group of Sufis will remain busy till the message of Allah and the oneness message of the prophet with courage and fortitude. We are sad due to the fact that our religious scholars should pay attention to the incomprehensible conflicts so that there may not be the explicit violation of God's command. Ummah (the followers of Islam) should gather on the platform of "And Collectively hold the rope of God (the path of God) with strength and don't quarrel with each other". It is due to the unity of Muslim Ummaha that the preachers can preach the whole mankind to follow the belief of oneness of God.

period of the Holy Prophet (P.B.U.H.). We are right in raising the question that there were no Ahel-Hadits, Ahel-e-Quran, Deobandis, Bralvies, Wahabies, Shias and Sunnis during the period of the companions of the prophet (P.B.U.I-I.)

There is no mention of the words like Maulana or Mo/vi es. Why have people not looked for the etymology of the words molait or molviat? Were some elders famous with the name of Molvi Abu Harira (R.A.) Molana Maaz Bin Jabal (R.A.) Mullaha Ibne-e- Masood, Allma Ibne Abbas, Hakim-ul Umat Ibne Umar, Molana Abu Bakar or Mufti Usman-e Ghani during the period of the companions of the prophet?

Why is the "Sufi" a focal word of the whole discussion?

Because a St(fi says that there should be harmony between word and deed, inner-self and outer-self. If there is no harmony between inner-self and outer-self, there is no promise of the acceptance of worship. If there is no belief (Eeman) with Islam, there is no completion of islam. If one does not offer prayer with sincerity and concentration, prayer will not become miraj-ul­ momineen (zenith of the believers). If we do perform the Haqooq Ullah (human rights) we can't get rid of Shirk. The purpose of the creation will not complete if we do not get the recognition of God by understanding Allah, the only one. The message of sufi is:

Everybody's life is governed by spirit and spirit has seen Allah in the inception. A man, who is aware of his spirit, can see and understand Allah in this world." 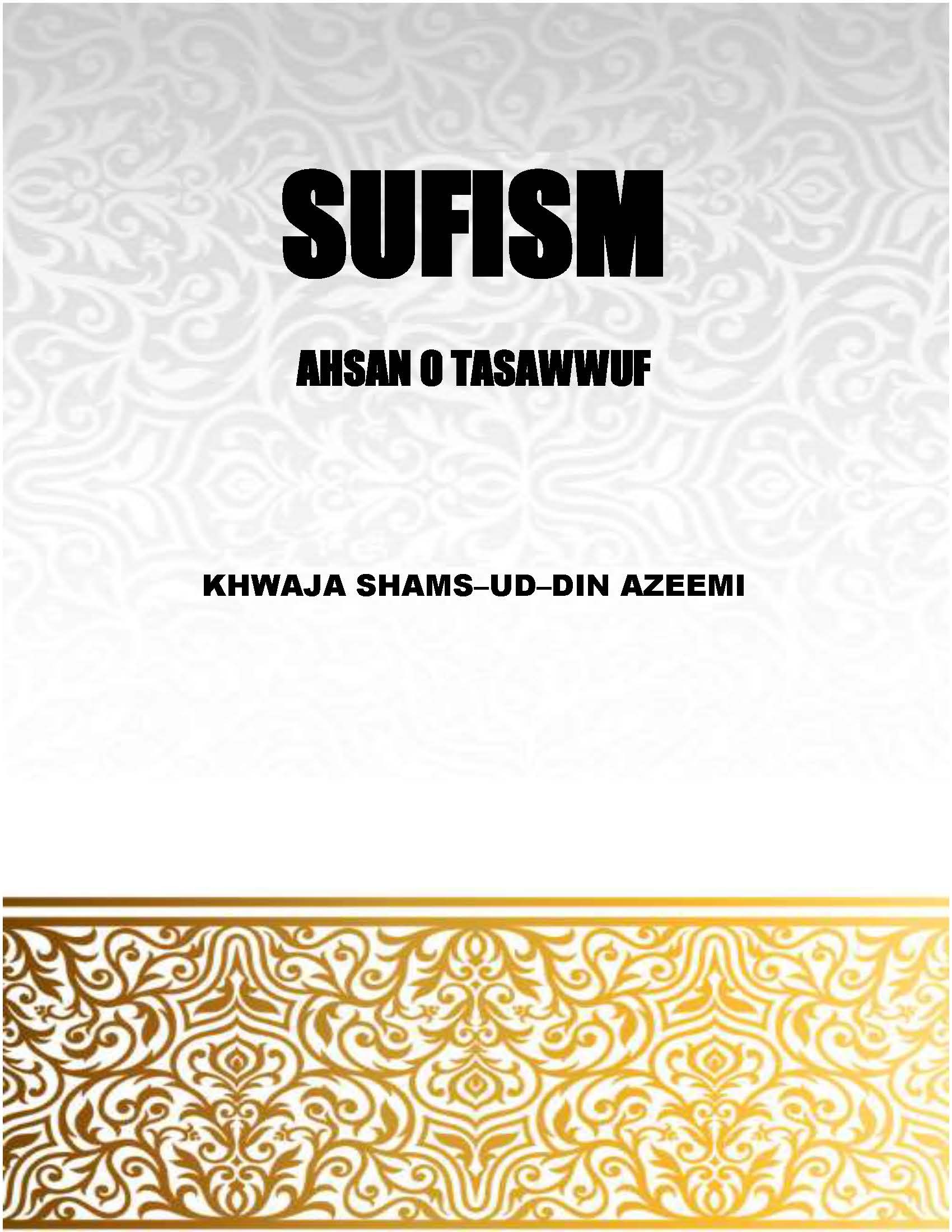