Chapter No. 8 Diseases and Coloured dreams

Man spends his entire life in two types of senses.

1.     Diurnal senses or the senses of the wakefulness

2.     Nocturnal senses or the dream senses.

Colours play equally important role in the dreams just as any act in world of wakefulness is manifestation of colours. When we think about something either we are very much interested in it or our interest in that thing is at its lowest ebb. If thinking could stay on a point and the impressions become deep then its manifestation is necessary. It is one of the clauses of the Preternatural Law. No thought can take a material form against this law. Just as in wakefulness a thought manifests when the mind focuses on it, similar in the case of dreams. We perform all those acts and deeds, which we do during awakening, for example, if we see a rose during awakening and the colour of the rose interests us similarly when we see a rose in our dream, the colour of the rose is witnessed by us.

Seeing, hearing, feeling, experiencing delight or sorrow, feeling healthy or sick; are common in both types of senses. A person feels weak and debilitated when he sees him sick in a dream just as a person feels weak during awakening when he is sick.

It is the law of Nature that life remains active whether man is in the state of awakening or dreaming. Only difference is that during wakefulness the physical body directly partakes in all the activities, whereas during       the state of dreaming    one moves around without involving the material body.

Nothing in the universe is colourless, the universe includes the world seen and unseen and beyond. When a person travels in a dream, he travels on the earth, sees the sky, ravines and rivers, springs and brooks; oceans and mountains, he sees himself walking or flying in the space. And when he happens to see the sky, the moon, sun and stars are witnessed just as he sees them during awakening·. If he finds himself roaming about in a garden, he witnesses flowerbeds of various colours and kinds, water gushing out in fountains, multicolour fish in the water attract his attention, light and dark green leaves of trees. fruits like mangoes, guava, pears, apple. Grapes, dates and others. When he sees them he recognizes them because of their form and colours. When he sees apple, he identifies it due to its colour and shape and when he sees grapes, he recognizes them by their distinct colours. If he witnesses lawns in his dream, he recognizes them due to their colours. If he dreams that he is having orange, it never happens that the colour of orange is non-existing. He might be seeing it somewhat in a different colour, but he does see it in one or the other colour.

This all testifies that the significance of colours cannot be ignored even in the state of dreaming. When we see a Negro in our dream, we see him as black as we see him in wakefulness. And, similarly we see a man having fair complexion in a dream just as we see him during awakening.

Importance of colours during dreaming can also be judged from this illustration that when a person sees fire in his dream, he recognizes it as fire not only from its colour but he senses the heat as well. And, if a person finds himself in a place where the snow is all around him, he feels the cold besides registering the white colour of the snow but if he finds a fire burning, in that case, he reports about feeling warmth. Obviously the physical body performs in the material world whereas in the world of dreams, the physical body is suspended. For a detailed account of these things, please refer to book "Dreams and Interpretation" by the author.

Once someone asked Hazrat Ali, "How did you recognize God?"

"By failing in my intentions'', he had replied.

In spite of the fact that every wish of man never fulfills and all his intentions do not materialize, desires and wishes keep surrounding him. That is to wit, the material life of man is a series of wishes. If one desire does not fulfill he starts chasing another one. And, this is necessary all the same because the ticking clock of life does not stop to wait.

It is man's basic weakness that he is ever complaining about failures and deprivations whereas failure and deprivation compels him to take the next step. When a person stops on a point, upon failing in his desires, wishes or intentions, sense of deprivation prevails upon him as stopping on a point is unnatural and against the law.

Sense of deprivation is such a tree of disease, whose every branch sprouting from its trunk and every leaf on its branch is nothing but dismay and grave sense of deprivation. The sense of deprivation results in psychological problems that initially start as mental disorders or derangement, which grows into diseases of various types like tension, depression, Schizophrenia mania repet1t1on of thoughts and deeds. When the nervous system deteriorates from these disorders, it falls prey to other diseases like low or high blood pressure, diabetes, cramps and fragility of bones etc.

Nature is kind, benevolent and generous and inspires the creatures living in the universe to have a peaceful living. When sense of deprivation prevails upon a person to such an extent that he falls prey of aversion from the world, Nature arranges colourful dreams for him, which is a sort of involuntary treatment for his problems.

One seldom sees colourful dreams but whenever such dreams are witnessed, it is an indication of the generosity of Mother Nature.

If the brain cells that control the nerves suffer deterioration, are tired or slow down then the patient sees blue colour in his dreams, that is, he witnesses everything appearing in his dreams is blue. And if the nerves have not grown weak and the memory has impaired for some other reason, then he observes blueness in the depth of everything, which he sees in his dreams.

One of the mysteries of the dreams is that man witnesses everything good or bad in his dreams and is affected from it. Sometimes one experiences the same during wakefulness, which he had seen during dreaming. This also happens that a person sees himself suffering from fever and when he wakes up he finds himself actually suffering from fever.

Many people have reported to remember poems after awakening, which they had listened in their dreams though they had no taste for poetry. There are instances in the history, where an illiterate man saw himself in the company of scholars and upon awakening he was found to be a man of scholarly wisdom.

In the world of literature and art many such instances are found when the dreamer composed a song or wrote poetry and upon awakening they simply penned it down and it was a masterpiece. Maulana Jalaluddin Roomi had best of his couplets during dreaming and he wrote them after awakening. Ibnul Faras, the great Sufi poet composed all his best poems in    his   dreams        and  wrote       them on   paper       in wakefulness. Many famous couplets of Shaikh Saadi were also conceived in dreaming. There exist many examples in the fields of art, poetry and even in science and technology, first the idea was seen in dream and then later on it materialized in the material world.

Structure of organic compounds     of carbon remained a mystery for the scientists. Whenever someone suggested something he would come under fire and resulting dissatisfaction forced them to pass by that idea and the journey of quest continued. One night Kekule von Stradonitz wolf(1829-96), German Chemist who was working hard on the structural formation of carbon compound, was preoccupied in his efforts to find the solution to this unresolved problem when the sleep knocked him out he saw six snakes in his dream, every one of them holding tail of the other in its mouth, thus forming a hexagonal shape, which reminded him of organic compound of Benzene. After awakening, he proved that the Benzene was exactly as he had seen in the dream. Thus. the perplexing enigma of organic chemistry saw- its solution in a dream. His discovery is named after him as Kekule Formula and is also known as Benzene Ring 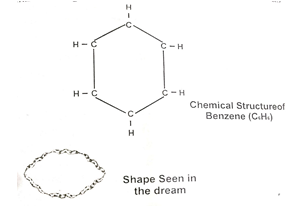 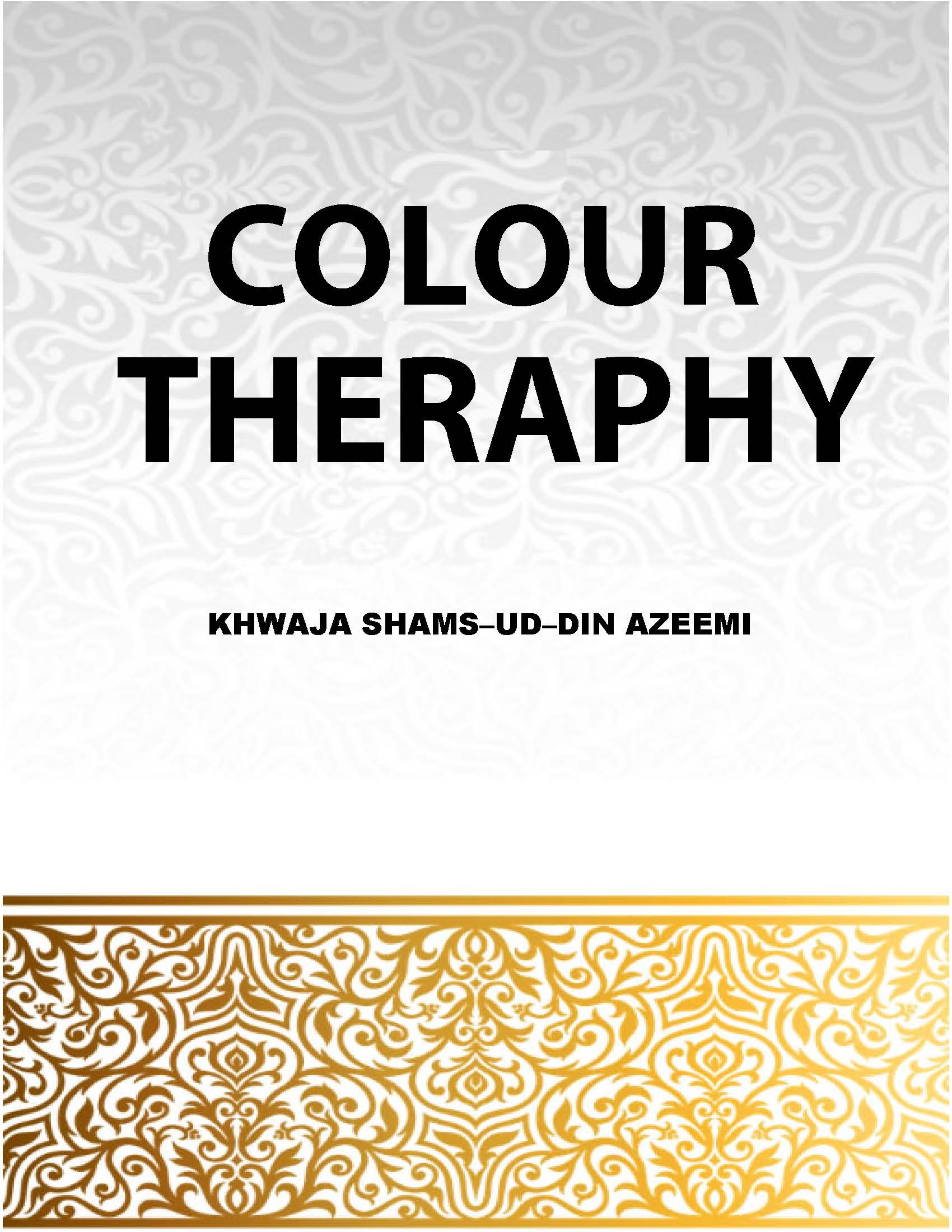